Thought I would share this one with everyone, seeing as how it’s massive and actually pretty darned cute.  As I mentioned in my last post, my partner’s kindergarten class this year is called Blue Whale class.  Well, if you’re doing floor cushions, what’s a blue whale class without… a blue whale (duh! what did you think I was going to say, a crab?)

Robert’s reaction when he first saw him as he walked in the door this afternoon was “AWESOME!!!

He’s stuffed with a combination of pillow stuffing and styrofoam microbeads, you know the stuff that is inside moshi pillows? I wanted to try to get his tail to stand up, but I guess the tail base isn’t strong enough to hold up the fluke.  Oh well, it’s one more place for a child to sit (this one can hold 2-3 children, depending on how good of friends they are).  And he was so much fun that I told Robert, half jokingly that I was tempted to keep him.  I’m trying to come up with a name for him, so if anyone has any ideas, please let me know in the comments.

And now for some pictures of Robert’s classroom windows (which for the most part, I designed, drew, and in the case of the “Nemo” window, put together. 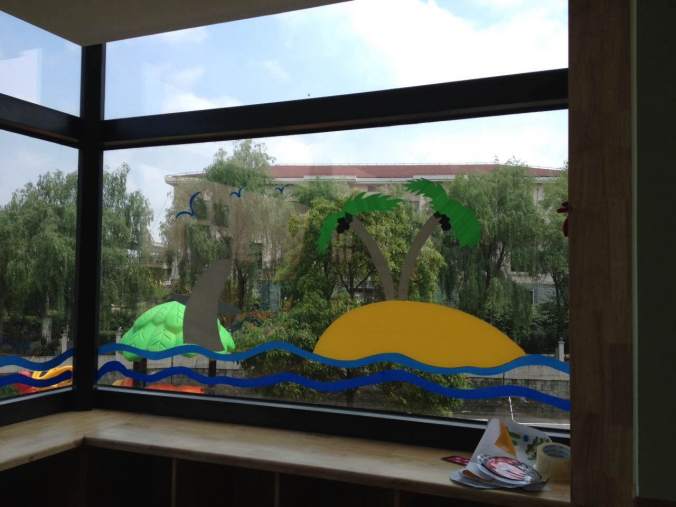 on the windows overlooking the playground we have a tiny island with it’s accompanying breaching whale.

On the next window over, a ship with whale fluke.  The ship I based off of a picture I found on yahoo search,  It’s actually a pirate ship, but instead of a pirate flag, it’s going to have the school’s crest on the flag.

And this is the Observation window, the “Nemo” window I mentioned before, where parents can look in on their children.  There’s a Momma whale looking over her baby who is playing with a turtle and two dolphins.   By the sea anenome in the middle, Marlin is asking Nemo if he remembered to brush, and the Momma whale is asking if anyone knows how to speak whale (Dooo yooooou speeeak whale?) and Dory is going “Oh oh oh, I can speak Whale! Oaaaoooooaaaoo!”

And to top it all off there is a little crab waving to everyone from near his home in the seaweed.

Today, they had the Relocation Day at his school, where the parents and children came to see the classrooms (actual moving day isn’t for another week, if everything goes well,) and Robert tells me that all the parents really liked the windows.

I hope you enjoyed this installment.  Robert says he will get me a close up of Nemo, Marlin and Dory to share with everyone, so when he does, I’ll post that as well.  Until next time…